"Don't fall for the shark, stay on the arc!"

Archipegaflow is a fan-made Splatoon musician duo made by @Yoshinatorz#9874 on Discord. The members are Penny, a disco squid, and Sulanna, a blue-ringed octopus. Both of them host Arcflow News in Inkopolis Coastline.

If you want to give critisism don't be afraid to do so.

Penny is a friendly and happy disco squid at the age of 21. She deeply cares for her partner Sulanna and seems to not like cleaning very much. She has a rather creative side.

She is friendly, very talkative, and almost never moody. She enjoys both crowds and couples of fans, but she can't stay with them for long. Her voice is high, loud and bouncy, and she usually is the main singer. People see her as 'bouncy' and 'fun'. Sometimes she annoys Sulanna, but the two are still great friends.

Penny's hair is kinda like Pearl's hair, just longer, down to her waist. They are light gray with purple at the tips. Like her disco squid ancestry, they glow bright colors. She has short and cheerful eyebrows. Though, I'm thinking of changing the style of the hair. She has light skin. Her eyes have a happy look to them, and they are lapis blue. Penny's teeth have one fang on the top and two fangs on the bottom.

(Okay I'm bad at designing outfits so) Penny's apparel consists of black shorts and boots and tights that are her signature purple. Her shirt is white with three purple stripes, and the headband she has is dark purple with three squids on it, facing the right.

Penny grew up in an apartment in Flounder Heights with a passion for music. Her family was into songs, so she liked to sing whenever she could, and it became a hobby. Penny was also a very friendly person, and would play with the neighbors, sometimes putting on little concerts for them. One day, when she was 13, her friends left after playing. She was about to go home, but she saw a strange-looking inkling in metal armor. When Penny asked thier name, she didn't know a clue of Inkling! That's when Penny realized, this girl was actually an octoling. They sat together and Penny taught some words. Sulanna would come to Penny after her classes to learn more Inkling every day. One day, she started humming the Calamari Inkantation, and that struck up a conversation about music between the two. Penny had an idea that they could make their own music, so they did so! They became good friends while making songs and sharing it with other people.

Sulanna is a cool blue-ringed octopus at the age of 20. She appreciates her partner Penny and is a huge fan of donuts.

Sulanna is sarcastic, but can cope with people when she needs to. She isn't afraid of speaking her mind, but will keep quiet. Her voice is low and strong, but can go high or soft sometimes. She doesn't like crowds, but prefers fans finding her one at a time. Fans describe her as 'cool' and 'relatable'. She really like donuts and being by herself, and hanging out with Penny. She also has a hidden talent for rhythm games. She dislikes messes and making errors.

One of Sulanna's front tentacles covers her left eye, and the other front tentacle frames her face. The two in the back form to be a ponytail that rests on her right shoulder, heavily inspired by Marie's casual hairstyle. Her eyebrows are confident and all of the tentacles are colored dark gray with canary yellow at the tips. Like her blue-ringed octopus ancestry, blue rings appear on the yellow parts when she is stressed. If she were to be stressed when her ink is blue, the rings will be darker. Sulanna's skin is light, just a bit tanner than Penny's. Her eyes are snow blue. They are heavy, yet interested. Sulanna's teeth are of the normal octoling teeth.

(Once again I'm not good at outfits) Sulanna's attire consists of a black skirt and boots with her signature yellow the color of her tights. Her skirt has three golden circles on the left side, and her shirt is plain shirt. A golden clip shaped like the octopus symbol rests on the right side of her head.

Sulanna was born into being raised as an octarian soldier. She didn't like it though, because she was teased and outcasted for being weaker than an average soldier. She confined herself to working with researchers, since it was easier. One day, she heard the escape of Marina Ida. Looking into it, she escaped because of the Calamari Inkantation. Sulanna dug up a file recording of the song, and listened to it curiously. Her soul was set free. She couldn't live underground anymore and escaped a month later at the age of 12. There she met an inkling. She said something, but because of the language barrier, she couldn't reply. She was taught a few words by her, and they could then talk. Sulanna started to hum the Calamari Inkantation, which struck up a conversation about music. Penny had an idea that they could make their own music, so they did so! They became good friends while making songs and sharing it with other people. She used to be afraid of people knowing about her octoling origins but now that the Chaos vs. Order splatfest occured, she revealed it to the public.

One day, when they were 18 and 17, they both decided to perform music on the streets to maybe get a bit of critisism. The song they performed was Coloful Sky. One inkling enjoyed their piece and told them they should go to a place called Inkopolis Coastline. It would be a long trip, but there they were looking for people -mostly musicians- to host their news. They said that their music would be perfect for it. After some long thinking, Penny and Sulanna packed their bags and set for Inkopolis Coastline, and auditioned. A few weeks later, the results came in and they were chosen! Now they host Archipegaflow News together to this day. They haven't hosted any live performances, as their stage is getting remodeled. 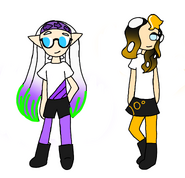 Penny and Sulanna visiting the Leaning Tower of Pisa 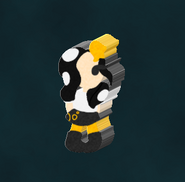 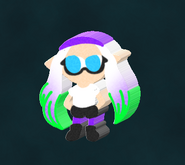 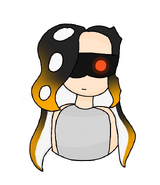 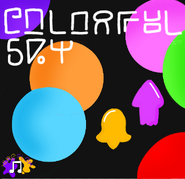 Album art for Colorful sky, the first song that brought Archipegaflow to fame
Add a photo to this gallery 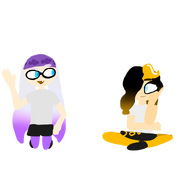 By Ms. Ellington Feint
Add a photo to this gallery

- Penny and Sulanna's names combine to be Peninsula.

- These are the Memcake Poems:

Your smile and colors are so bright, as you show your friend into the light.

You were once underground, but now you're not! A new life you have, and a new friend you got.

Retrieved from "https://inkidols.fandom.com/wiki/Archipegaflow?oldid=7995"
Community content is available under CC-BY-SA unless otherwise noted.