Female
“Parting is such sweet sorrow… See you!”

Blackpool Rock is a net idol duo created by ClashB-Lizzy . Whilst they do not host any news programmes in Inkopolis, they are very active online, posting their music online frequently.

Connie is a tropical bobtail squid. She stands at 162cm tall and is 21 years old. She has dark skin, a round face, and round, yellow and blue eyes. Connie’s tentacles are also yellow and blue, and are usually seen adorned with tiny flecks of colour, giving them the appearance of sprinkles on a cake. Three of her tentacles are held in a long ponytail, whilst another falls over her shoulder, and her last two are short and usually hidden. She also has an extra bit of "hair" not counted as a tentacle, similar to the Squid Sisters, swept over her forehead.

Connie’s usual outfit whilst performing consists of a white blouse with puffy sleeves, a blue layered skirt with an icing pattern, white tights and Mary Janes, white gloves and a choker necklace. She also wears a headpiece resembling a macaron, adorned with a bow, and has a tiny heart under her right eye.

Payton is a 22-year-old striped pyjama squid, who stands at 158cm tall. Her features are more angular than Connie’s, having sharper eyes, eyebrows, jawline and even ears in comparison. Her eyes are both red and pink, as are her tentacles, which have a striped pattern to them, giving them an appearance similar to a candy cane. Two of her tentacles frame her face, whilst the other four are tied up in pigtails on top of her head. She also has long bangs, which are cut at an angle.

Payton’s usual outfit whilst performing consists of a white blouse with puffy sleeves, a short skirt cover similar to Connie’s over shorts, boots, white gloves and a choker necklace. Her headpiece resembles a lollipop, with a ribbon tied around the stick, and she also has a small blue heart marked underneath her left eye.

Both Connie and Payton had pretty normal upbringings for most of their early lives. Whilst Connie was born in Inkopolis, Payton was moved from overseas due to her parents separating, going to live with her mother for most of her childhood. Both of them also developed a liking for music and performance during their youth, with Payton even taking piano lessons since around age seven. Meanwhile, Connie joined an idol agency during her young teens, in hopes of being able to perform in a group.

When Payton was seventeen and Connie was sixteen, Payton auditioned for the same agency that Connie’s group was owned by. Whilst she originally wanted to become a solo artist, she was placed into Connie’s now semi-successful group, with the hopes that after she “graduated” from the group she could get a solo career off the ground. This was how the two met, and over the first few months, they became good friends.

It was at this point that Payton realised she was developing romantic feelings for Connie. Unfortunately for her, their agency banned its idols from being in relationships, mainly for marketing purposes. Because of this, Payton was forced to keep her feelings a secret, with the fear that telling Connie would also get her in trouble. In order to express herself in some way, Payton took up songwriting, using her former experience as a pianist to help her.

Approximately a year after Payton had joined the group, Connie and Payton had gone out to dinner together. This had been just after a full day of practice, so both of them were exhausted, but had decided to grab some food together as they rarely had an opportunity to. During the meal, Payton casually brought up that she had begun composing her own music, with hopes that their group could perform it one day. This peaked Connie’s interest, and sparked a conversation which lead to Payton accidentally confessing that she had feelings for someone. After more prodding, Payton told Connie how she felt about her, and Connie told her she reciprocated. This begun their relationship, though they were forced to have it in secret, which was difficult due to them so often being in view of their agency.

It would be another year before their relationship finally became public, due to Connie accidentally letting slip that she had a girlfriend during an interview. Not wanting Connie to suffer alone, Payton also confessed, and the two of them were forced to leave their old idol group. It was at this point that Connie suggested, “We can just make our own though, right?” With their two years of experience as well as Payton’s songwriting abilities, Connie and Payton decided to form their own group, and a few months later, Blackpool Rock was formally established.

Despite leaving their old label, Connie and Payton are still on good terms with their old group, going so far as to unofficially attend their final concert before they disbanded in 2018. Payton in particular is good friends with their old leader, Lisa, though this friendship has waned somewhat due to Lisa's busy solo career.

Currently, the group operates almost exclusively online, though they often attend idol events with other groups, with almost all of their live concerts being performed at such gatherings. They also have a monthly livestream, “Rock Candy LIVE!“, during which they perform songs live, answer fanmail, and other activities such as playing games or challenges.

Connie is very extroverted, giving off a “party girl” vibe, though below her silly exterior she has a heart of gold. She loves attention, which was what originally lead her to start performing, and prides herself on being able to please a crowd – however, if this goes wrong, her self-esteem can take a hit. Despite this, Connie says she would not quit music “Even if the whole world plugged its ears”. She also has a tendency to get over-excited, especially when with other people, to the point where she sometimes forgets about her surroundings, leading her to being a little clumsy at times, especially when singing. Connie is also surprisingly introspective, and easily knows how to express the feeling not only of herself, but often of others, usually via the means of writing song lyrics.

Payton is much more reserved than Connie, often trying to keep her calm and quieter in public. Unlike Connie, she can sometimes struggle to sing loudly enough during recordings, due to her feeling awkward. She also struggles with minor stage fright, though this only occurs when performing in front of a large crowd. Whilst this used to be far less of an issue, due to their old group being made up of up to fourteen people at a time, Payton is gradually trying to become less afraid with her girlfriend’s help. Despite this, Payton is very active online, constantly interacting with her fans. In contrast to Connie, Payton has a tendency to bottle up her emotions, but finds the best way to express them is through music. In an effort to aid her compositions, Payton is an avid learner, constantly trying new things with her music as well as in other areas, such as dance. She is now also very openly affectionate with Connie, which is shown in her choreography, having Connie and Payton constantly near each other during performances, and often holding hands or even doing lifts. 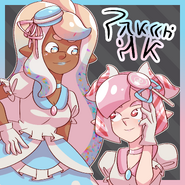 Valentine's Day 2020 art.
Add a photo to this gallery

Retrieved from "https://inkidols.fandom.com/wiki/Blackpool_Rock?oldid=10052"
Community content is available under CC-BY-SA unless otherwise noted.