Cephalopop (stylized as CEPHALOP☆P) is an idol duo as well as a host of Inkopolis News. They provide announcements for stage rotations, as well as Splatfests. Formed by two rising internet stars named Coral and Aqua, the duo hope to spread positivity in the midst of the conflict between chaos and order.

(DISCLAIMER: This page is unfinished and may change at any time. Suggestions are always welcome.)

Coral is a 19-year-old Inkling girl of average height, standing at 5'3", with a rather pale skin complexion. She has very long, pale pink tentacles, worn in a ponytail on the left side of her head, with one tentacle used to secure the ponytail. Her tentacles are slightly translucent near the ends and have a rosy pink tinge at the tips. Her eyes are violet with pink pupils, and she has three sharp eyelashes (two upper, one lower) on each eye.

Her signature color is cerise (#FF0049), but will change during Splatfests.

Aqua is a 19-year-old Octoling girl with lightly tanned skin. At only 5'0", she is shorter than most Octolings. She has medium length, wavy tentacles that are dark blue in color, worn in a high ponytail on the right side of her head, along with blunt bangs. Her tentacles are adorned with rings that glow a bright blue when she experiences intense feelings of excitement. She has bright, turquoise-green eyes with cyan pupils, as well as five lashes (three upper, two lower) on each eye. She has a split lip that gives her a cat-like smile.

Her signature color is blue (#00A2FF), but will change during Splatfests.

Coral is a very serious and hardworking girl, with a no-nonsense approach to her line of work, but she is also quite timid. She has a short temper and is easily flustered. She is fairly stubborn, and will often try to put on a tough, standoffish demeanor in public to hide her diffidence — although she secretly wishes she could be more honest with her own feelings. Because she values her career so much, she can be quite strict and even a little bossy, but underneath it all she's very caring and dependable.

Coral loved to sing since she was barely hatched, and it often comes as a surprise when the normally reserved squid sings with a clear, powerful voice. She is deeply passionate about music.

Aqua is more laid-back and easygoing than her more serious musical partner. She moves at her own pace and rarely gets angry, and is usually the one who cracks jokes during Inkopolis News broadcasts. Always having an optimistic outlook on life, Aqua tends to become overly-enthusiastic about certain things, such as Splatfests, and can become full of boundless energy when excited. She likes to poke fun at Coral during broadcasts, but she secretly really admires her.

Aqua was inspired to become a pop star when she saw the performance of the Calamari Inkantation — she wants to be a public figure who can make people smile like she did that night.

Coral grew up in a pristine residential area in Inkopolis, expressing a love for singing from an early age. Her family was relatively well-off because her father was a renowned archaeologist who specialized in ancient astronomy. When she was five, she was taken to see the Youth Folk Singing Contest, and was inspired to become a performer when she grew up. Her father was unsure of whether he wanted his daughter to have a singing career, wanting her to take on the family tradition of archaeology. While not completely unsupportive, he took up a condescending attitude towards Coral, especially when she practiced singing, which just caused her to become rebellious towards her father and sing even more. She gained a small audience when she started posting songs online at the age of fifteen.

Meanwhile, Aqua grew up in Octarian society as a member of the army, though she was reluctant about her position. During her time off duty, she would listen to ancient records of songs created by humans and stare out the window, wondering if she was missing something in her life. When she was fourteen, she witnessed the battle between Agent 3 and Octavio where the Calamari Inkantation was performed, and she felt something awaken inside her. At that very moment, Aqua dropped her weapons and ran away, leaving the army behind to become a pop star.

She soon moved to central Inkopolis Plaza where she met up with her cousin* — another former Octarian army member who escaped to pursue music a few years prior — and joined a pacifist street gang he was in, The Undertow. Aqua told him about her own interest in creating music and asked for his help, and he was happy to oblige. She began to post both original songs and covers online, with a little help from (Aqua's unnamed cousin*). She also became quite active on social media and gained a small audience.

At some point afterwards, Coral and Aqua met online and became friends, though they never collaborated on any songs.

Shortly after the end of the Chaos vs. Order Splatfest, fights began to break out between the two sides, damaging the sense of community in Inkopolis as young, naive squids and octos fought over what the city's fate should be. Remembering that she wanted to become a pop star to make people smile, Aqua expressed an interest in collaborating with Coral on a song inspired by the Final Fest, not wanting either side to fight. The completed song, titled Like a Raging Storm, was uploaded online, and it was an instant hit among both girls' relatively small audiences.

One day, however, Coral and Aqua were taken up by the same agency that took up both Squid Sisters and Off the Hook, and a new idol unit called CEPHALOP☆P was formed. A more well-produced version of Like a Raging Storm was released as their debut single, and the song spread like wildfire. As a result, Cephalopop was seen by everyone as a beacon of happiness in the midst of the conflict, and the two girls recieved a huge spike in popularity. Coral initially panicked at the thought of being so famous, but Aqua reassured her, reminding her of the positive message they wanted to spread throughout Inkopolis.

Eventually, after certain events, Cephalopop took over as the new hosts of Inkopolis News. They were also made the face of the new wave of Splatfests.

((Aqua's unnamed cousin*) — Information on this person will be added soon.)

Cephalopop's music has a somewhat sci-fi, space-like theme to it. The songs are mostly within the synthwave genre, with techno/dance elements. It's described as sounding futuristic, yet still upbeat, and perfect for battling to under a clear night sky.

Their earlier songs were produced with the help of (Aqua's unnamed cousin*), who has proficient skills with keyboard playing. 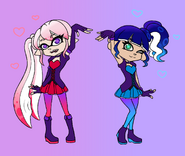 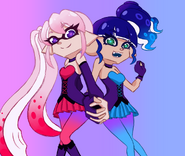 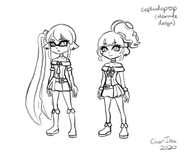 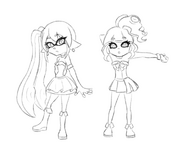 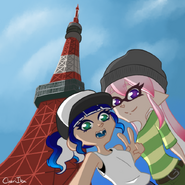 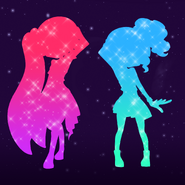 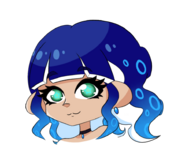 Aqua with her hair down
Add a photo to this gallery

Retrieved from "https://inkidols.fandom.com/wiki/CEPHALOP%E2%98%86P?oldid=10171"
Community content is available under CC-BY-SA unless otherwise noted.