Nelly is a green-eyed valvatida starfish (Mediaster aequalis). She has crimson hair, with an overflow to pink ink color. She wears a dress with a skirt, black and white stockings, black fingerless gloves and black boots. Her "idol sign" is a pink diamond.

Nelly has a lively and energetic personality, similar to Callie's. It's really easy to offend her, because she often takes everything seriously. She isn't so resentful, though.

Nelly grew in a loving family. Her parents weren't really good in music, so she started to study in a music school on her own initiative. She was also trying to compose music from an early age.

Nelly holds the vocals in their songs, and she writes most of the music and lyrics, too.

Sam is a sea bunny (Jorunna parva). Her eye color is like Nelly's, it's just upside down. She has white and grey hair, turquoise dress with shorts, black and white stockings, white fingerless gloves and white boots. Her stockings, gloves and boots have the opposite color of Nelly's ones. Her "idol sign" is a turquoise bubble.

Sam's personality is chill. She jokes about Nelly's taste and childish personality sometimes, but that doesn't make Nelly dislike her, she's her best friend after all. She takes splatfests seriously, and she usually gets upset when she loses, but she deals with it pretty quick after Nelly cheers her up. Sam is a fan of jazz music, that explains her team in one of Colorful Tide's splatfests.

Sam grew in a pretty strict household. Her parents were also musicians, and they wanted their daughter to choose the same path. Sam spent a lot of time on studying in a music school. She sings and plays piano very well now.

Sam holds the vocals and synth.

Nelly and Sam are childhood friends. They lived in the same village, and they always wanted to become famous singers. They even tried to make some songs, but they didn't bring them much fame. When they grew up they decided to create an idol band.

Stay on the wave!

I changed they voices recently. I'll probably remake all the other songs anytime soon. 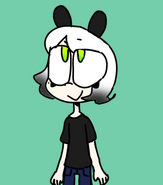 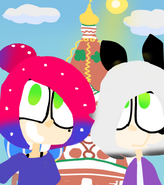 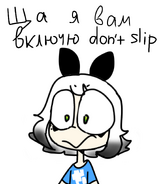 What even is this 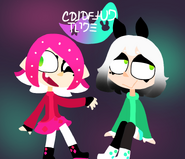 Album cover
Add a photo to this gallery 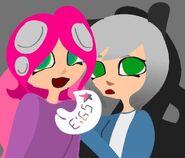 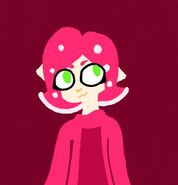 A Nelly art (by Doroline/squid kid)

An old Sam art (by Bapana) 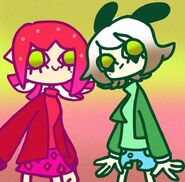 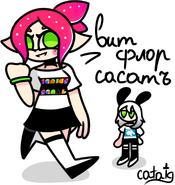 Retrieved from "https://inkidols.fandom.com/wiki/Colorful_Tide?oldid=10310"
Community content is available under CC-BY-SA unless otherwise noted.