Alongside Tide Pool, Deep Dive have been one of the two groups rising into popularity in New Sardine. Sue and Nami are typically known to even perform alongside Tide Pool during Splatfests, and have enven collaborated with them in a few songs.

Sue (Japanese: みず Mizu) is a 23 year old "Inktoling" who serves af one of the vocalists in the duo.

She has dark skin with oval-shaped cyan eyes. Her tentacles are dark grey, but gradient out cyan as well.

Her outfit consists of a black dress with a light blue belt, dark grey shorts, and a pair of black shoes with cyan soles

Nami (Japanese: イラクサ Irakusa) is an 18 year old Jellyfish (specifically a Sea Nettle) who serves as another vocalist in the duo.

She has yellow skin with black oval-shaped eyes, often having heart-shaped shines to them. She has an orange "hat-like" top to her head where 6 thin tentacles flow down from.

Her outfit consists of an orange dress that has a wavy pattern on it, colored in a slightly more reddish orange. As for accessories, she has a gold neckpiece with a red gem on it and a pair of gold bracelet on both hands.

Sue is mostly a very mellowed out inktoling, especially in contrast to her friend, Nami. She often presents her self all around as calm and level-headed and usuallys tries to keep a positive outlook on things.

In spite of her being a hiveminded-jelly, Nami seems to do what she can to stick out from the crowd. She's known to paint herself as a very eccentric, yet somewhat childish individual who never shys away from the opportunity to make friends.

It's also noteworthy that she has an awkward speech pattern, known for talking in third person outside of the songs she sings in performances.

Sue was born from a couple in Calamari County. With an inkling mother and octoling father, he inherited characteristics of both spieces, thus making her an "inktoling". This big difference, while other never seemed to mind, set her off a bit as she began to feel like she didn't belong. As she got older she made the move to New Sardine in hopes of finding a way to fit in.

As time went on, she began to look into a music career, which lead to her meeting up with Nami. After a discussion, it was revealed that Nami felt that, despite being a jellyfish with no true individuality, it would be nice to pretend that she was different and stand out from the crowd. Her idea was to try and become an idol in hopes that it would help he be set apart from the rest. With this semi-mutual but not very mutual reason for their career choices, they decided to team up and form Deep Dive for the first time.

While things were rocky at the start, the two climbed in popularity. Eventually this rise to fame lead to them meeting Barry and Reif of Tide Pool, to which a "friendly competition" began bubbling, along side a few collaborations, C.O.L.R City being the one to boost both groups into stardom. However, unlike Tide Pool, Deep Dive were never able to become news hosts. This wasn't an issue due to the popularity of the aformentioned song, which lead to them performing it at splatfests alongside the octoling duo. 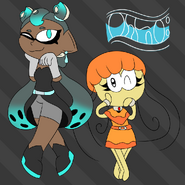 A piece made for Inktober 2019 referencing Nami.
Add a photo to this gallery 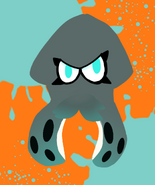 by ErrorV
Add a photo to this gallery

Retrieved from "https://inkidols.fandom.com/wiki/Deep_Dive?oldid=10138"
Community content is available under CC-BY-SA unless otherwise noted.