Fathom Out (JP - Cephalobots セファロボット) is an upcoming robot idol duo consisting of C-10 (Trent) and V-08 (Marion). They host the news, stage rotations, and announce Splafests in Neo Atlantis. Trent is a Cuttleling and Marion is a Draculing. They take on robot costumes and personas as idols, and their music genre ranges from house and disco to experimental rock-techno and synthwave.

Fathom Out first met in Blacktip Secondary School during their 8th year. Trent and Marion used to be in a little rivalry when they first met and wasn't as fond of each other at first, but soon discovered many similar shared interests and knew each other better emotionally as time went on. The two began to hang out more and formed a strong bond ever since, despite their social background differences.

Before becoming a duo, Marion was in an indie rock band called the “Beachcomb Buoys”. He left the band after it quickly gained infamy from a disastrous school concert; while Trent collaborated with a few anonymoys artists on the internet and released a one-hit-wonder single, which earned him a bit of short-lived fame. Not long after that, both Trent and Marion picked up more interest in electronic music from attending raves in Neo Atlantis, which eventually caused them to form Fathom Out after a few nights of tinkering.

At the beginning, they were only recording in Trent's cramped synth-filled bedroom, and hosted a few shows in some local nightclubs or college venues. However, they only began to gain recognized fame after their first album sucessfully became a hit across the top inksport cities, and they were soon offered a big record company’s “idol” deal in Neo Atlantis, since the place has been lacking idols for more than a decade, which was guaranteed to push their career further. Both of them were shy and never knew anything about being idols, but were willing to take the deal since it would allow them to push their limits further, so they didn't hestitated to waste the chance.

Since both Trent and Marion are both reserved individuals and don’t want fans pestering them in public, they worked with their record company to create robot costumes and helmets that can hide their faces from the public during the news, concerts, and splatfests. They also have robot codenames as well: C-10 and V-08, and also use a robotic vocoder in both the news and their songs. Both of their alter-egos are well-hidden, however, only their closest friends, important colleagues and trusted acquaintances get to acknowledge it.

Trent (JP - Osukou オースコウ) is a 19-year-old Cuttleling of the species Sepia apama. He's 185cm tall, and is fairly skinny. He has golden blond short symmetrical hair and a wavy "mantle" behind his head like many other Cuttlelings. His eyelids are downturned and have thin bottom eyelashes (3 each eye). Trent's eyes are brown with equilateral triangle-shaped pupils. His skin tone is neutral fair. His beauty mark is located above his right eye. His ears are shaped like triangles, but elongated and droopy.

As C-10, he wears a silver helmet with a squid-shaped visor and hero-like headphones, both of which can project LED lights on it. His clothes consist of grey jacket and pants with LED lights embedded on them, silver zippers, neon orange strings on the shoulder, silver robot gloves, and a pair of boots with silver heels. His leggings fade from vivid orange to orange red.

As C-10 (robot), he tries to entertain his audience in the most enjoyable way possible. He’s more extroverted one of the duo with a light-hearted personality, always being overly informative like an assistant robot. When unmasked, Trent is more aloof and relaxed, but still remains talkative and analytical. He has some knowledge of human relics after spending most of his childhood in Inkopolis and seems to look forward to daily archeology discoveries.

Growing up in a family with high expectations, he appears to be naive and submissive under the presence of authority,  specifically his parents, constantly climbing up to their high expectations. However, his work in music was enough to prove his independence to them, showing that he doesn't need approval from anybody to do what he loves.

Trent was born to an influential old-school Cuttleling family from Inkopolis, then later moved to Neo Atlantis for personal reasons. He had an easy life with his family’s wealth but was raised to excel in multiple subjects, although he didn’t dared to complain about it. His father was a retired politician with traditional values, and his mother was a famous enka singer with barely any time for her children. Both of his older siblings work in big industries.

Trent's family has high expectations for him, not just in school subjects, but also in general. He skipped a grade in middle school, had almost perfect records in terms of academics, and decent popularity school-wide, but outside of his public image, most don't actually know his interests personally. Trent was afraid to open up, and bottled most of his feelings until finally letting them out slowly to Marion after a few years.

Moving to NA introduced Trent to new palettes of progressive turf war music, and inspired him to start becoming a songwriter. It was his way of expressing himself and dealing with stress, even if it could result in disobeying his parents. A certain one-hit wonder song he wrote and uploaded on the internet during his high school years suddenly became viral for a few months - which lightened his mood up, and motivated him to enter the music industry seriously.

Fathom Out was Trent's current proudest achievement in his life. It didn't only allow him to express his ideas through music, but broke him free of the expectations set by his family and peers. As the more extroverted one of the duo, he speaks for Fathom Out and does most of the talking for events and interviews while he leaves the aesthetics and artwork for Marion to decide, always ensuring that his partner feels comfortable. He also collabs with other artists around NA as well, branching out his experimental palette in songwriting and composing. He doesn't talk about his family as much, and sometimes visits Stickleback Shrine to relief his stress.

Marion (JP - Mori モリ) is a 20-year-old Draculing, the humanoid descendants of the cephalopod species Vampyroteuthis infernalis. He is 170cm tall and has a thicker body build. He has long jet black fading to sky blue hair with thin webbed bangs that cover his eyes, and white spines on his "hair" that resemble horns/ rose thorns,b plus long filaments that fade from jet black to dark blue. His skin tone is golden fair. His eyelids are slightly upturned and have triangle-shaped marks on the bottom and top parts. Marion's eyes are light blue with lighter upside-down equilateral triangle-shaped "pupils", and his sclera is pitch black, like any Draculings'. His beauty mark is located above his left eye.

As V-08, he wears a golden helmet with a vampyromorph-shaped visor and "ears", both of which can project LED lights on it. His clothes consist of a long shirt with square LEDs embedded on it, golden zippers, neon light blue strings on the shoulder, short gray sleeves and collar, golden robot gloves, and a pair of boots with golden heels. His leggings fade from ultramarine blue to pale blue.

As V-08 (robot), he's the introverted one of the duo. He's more comical and witty than his partner, sometimes poking fun at little details or his partner's informativeness and makes a variety of silly LED expressions. Without the helmet, he's not exactly your generic shy & chill right side idol. Although his introspectiveness and timidity stays, he is much more assertive and has a deadpan, dark sense of humor. Despite being shorter than Trent, he is one year older.

Starting at a young age, Marion suffered from social anxiety and wanted to keep himself out of others' sight; due to his inability to act genuinely friendly and his lack of sympathy. He is often seen as intimidating and hard to approach, but despite that, he had confidence in himself and was never afraid to speak his mind.

Marion was the great-great-grandson of the last Draculing chief, who led his race to migrate into the surface for a better life. This leader was rebellious, unwilling to stay in the darkness like the other tribes. The surviving Draculings didn’t know what to do on the surface at first, as it doesn’t seem like most creatures welcome their presence. Yet, they slowly adapted Inkling culture and language, conforming to the ways of their more modern cousins.

Marion’s family didn’t have too much nor little. As a kid, Marion was timid and socially awkward towards other children his age. He had great trouble trying to be friendly, which causes his peers to leave him out of activities. Without anyone outside of his family to talk to, life didn't seem as colorful for him, until he was given a cheap toy guitar by his parents on his 8th birthday, which gave a headstart to his future musical talent.

By the time he started attending middle school, he found a liking for punk rock music and even joined a band, though it wasn't successful and he leaned at more electronic genres afterwards. He still avoided making new relationships outside of his family, but his views changed when he decided to open up more to Trent. The two became great friends despite differences, and from there Marion started to gain more self-confidence for himself.

As Fathom Out became more popular, Marion was more willing to talk to new people. He and Trent started a new wave of music for many young folks in NA, which was one of his favorite accomplishments. Seeing Draculings finally finding a place for themselves in a big city expected to be dominated by Inklings was quite a pleasant experience for him. He have a younger sibling named Luzon, who is a part of DuoTone , an underground EDM band. Both have been quite distant lately due to being busy with their own music careers. In his free time, he likes to chill out at the saloon with Trent. 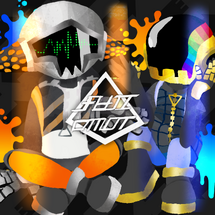 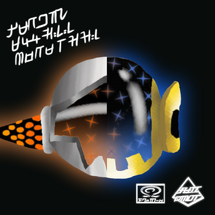 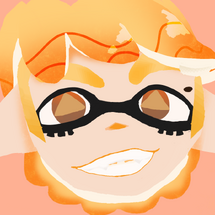 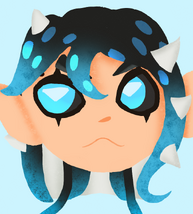 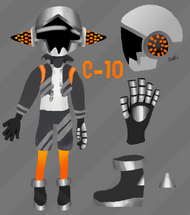 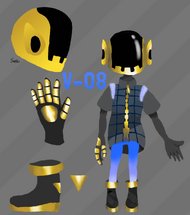 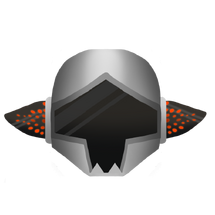 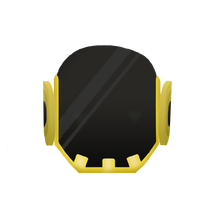 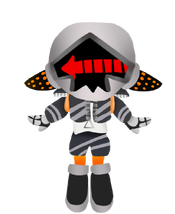 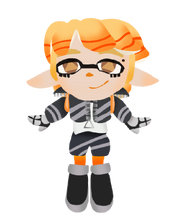 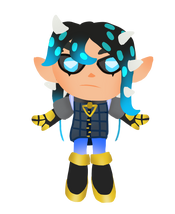 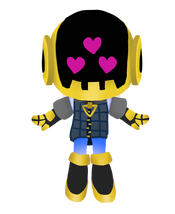 C-10's mem cake
Add a photo to this gallery 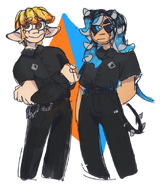 By @Neko on Discord 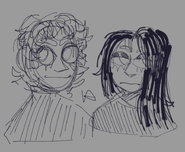 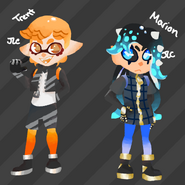 By JLC7
Add a photo to this gallery 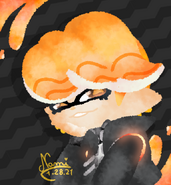 By Nam's chan
Add a photo to this gallery

By @River on Discord 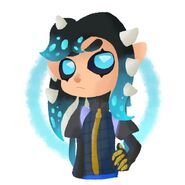 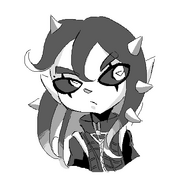 Retrieved from "https://inkidols.fandom.com/wiki/Fathom_Out?oldid=14721"
Community content is available under CC-BY-SA unless otherwise noted.