Fishnet Friends is owned and created by PufferFish Productions (KasaneTetz).

Here comes Inkopolis’ new rising stars, the Fishnet Friends! We have Delta, the mature and fashionable star of the duo, using her fabulous vocals.

But it can’t be complete without River, the cute and geeky one. She composes the songs, and uses her high vocals.

Delta is a sepia latimanus, and has a tanned skin. Her white tentacles fade into orange and pink. Her eyes are yellow, and fades into orange at the top. Her hair is like the normal inkling girl hair, she has bangs at the very top of her head (similar to pearl), and two long matching tentacles. Her outfit is an orange sleeveless shirt, with yellow at the top. She has white gloves, white boots, and the sole of those boots are pink as well. She has a small hat on the top of her head, which is yellow, blue, and pink. Her bottom is sky blue shorts, with a transparent skirt, with a slit in the middle, separating it into two parts, with heart, star, trinkets at the bottom. Star and heart trinkets are on the fishnet lace coming from her hat. She also wears pink long earrings. She is 23 years old, and is 5”6.

River is a histioteuthis reversa, and her tentacles are short, and blue. At the ends, they fade to yellow and orange. Her eyes are a golden yellow, and they fade into a darker yellow at the top. She has light skin, and her tentacles have a straight, short cut. Her outfit has the same design as Delta’s, but she has a solid skirt. The top is light blue and the middle is yellow, and the bottom is sky blue. She wears white gloves and white boots, and a small beret with a star on the side. She is 19 years old, and is 5”1. She has two twin tail pigtails on each side of her hair. She has star and heart trinkets on the fishnet lace like Delta, as well on the bottom of her skirt.

Delta’s personality is overall rambunctious and fashionable. She is constantly online shopping, and trying on different clothing. She loves to shop (obviously), and often complains. She can be spoiled at times, growing up with wealth, but always makes sure to be thoughtful and kind. Her voice specializes in deep vocals, often giving her a “mature vibe” just by hearing her voice. She is the kind of person who is devoted to her followers. She looks up to Pearl, and often idolizes her.

She loves fashion, because as a young kid, her mom was a famous fashion model. She would go with her mother to her photoshoots, and look at the costumes in the closet, often dressing up, even if they didn’t fit her. Overtime, she gained an interest in fashion. She is also known for raging over things, and being quite impatient.

River is a nervous inkling, who, since she was a kid, is fascinated by jellyfish. She loves to study and has a knack for puns. She wasn’t the richest person around however she did grow up with a great deal of money. She can be timid at times, but usually once she opens up, is a positive and energetic person. Her voice can reach high pitches for long periods of time, and is the one who composes the songs.

Cureently, she’s been obsessed with studying jellyfish, and their species. She hopes that if her music career has to stop, or ends suddenly, she can go over to the field of science, and hopefully get a job in a lab.

They used to be childhood friends, mainly from meeting because they had the same classes in middle school. They were inseparable during high school, however after graduation they slowly slid apart. River became more interested in music, and Delta became more interested with fashion wanting to follow her mother’s footsteps as a famous model. Delta, not going to college immediately, got a job as a singer in a bar.

After the death of River’s grandmother (Old age), she went to the bar where Delta worked at, to mourn. After sparking up a conversation, and getting each others phone numbers, the two decided to meet up again later that week. During that week, Delta confessed her interest in music to River, River being ecstatic that Delta wanted to move on from her fashion dreams, and peruse the music industry.

After hard work, the two were able to make a deal with some manager, and published their first album, containing the songs: Mayday Bay, Blown Away Bubbles, and Clam Jam. They were a hit with a large group of people, and were able to start doing live concerts, tours, etc. They weren’t able to find a job as news hosts, but they make up for that with busy schedule of tours and concerts. 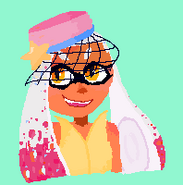 Retrieved from "https://inkidols.fandom.com/wiki/Fishnet_Friends?oldid=8893"
Community content is available under CC-BY-SA unless otherwise noted.