Fluoresce Haze is a Fanmade band created by agent 7 and friends. The band is based on the game Splatoon.

The band's genre is electronic rock. They use a electric guitar, bass, drums, and a piano keyboard. Their lead vocalist and guitarist is Akai.

Akai is the band's lead vocalist and guitarist. An inspiring young Cuttlefish that came from Los Angelfish to start his dream career as a musician. Forming the band Fluoresce Haze, he came across other talented individuals who were indifferent from the community and gave them a chance. He is known for encouraging other inspiring creators and being related to a famous celebrity.

Taru is the band's second vocalist and drummer. She is a very strange individual. whenever she is in the dark, she has this ability to glow in the dark. She adores her fans and have no problem about talking to one too. She met Akai during the 4 of July, her glow is the reason how they both meet. She seems to really love the company Opalia, due to her wardrobe being full of the brand. On the stage, the band uses minimal lighting to let Taru's natural luminescence make an impression on the audience.

Kari is the band's bassist. He is runaway soldier that is rebelling against DJ Octavio's rule of the Octarian race. Kari has an intimidating look that makes a lot of people think he is a delinquent. Despite that fact, he is an kind-hearted individual who is just misunderstood. He is the type of person who likes sugary foods and isn't afraid to show it. He met Akai in at The Shoal, there he was challanged a game of Air Hockey. At the end, Kari lost to him and Akai became his first friend.

Oti is the band's keyboardist. Oti is a rebellious Fishling who came from the secret society of Echilia. She has a very quirky personality that makes it easy for her to make friends. She has a liking towards music making and met Akai on her first day of Inkopolis. After some time, he heard her play some music and offered her to join his band, she took no pause upon joining him. 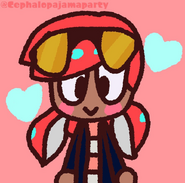 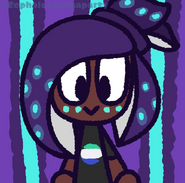 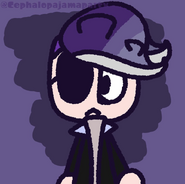 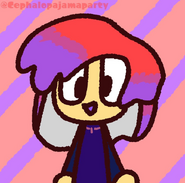 Retrieved from "https://inkidols.fandom.com/wiki/Fluoresce_Haze?oldid=10382"
Community content is available under CC-BY-SA unless otherwise noted.