H2O or Harbor To Ocean is a fanmade music band created by Squinkdoodle/Torazi. H2O travels around the world to hosts gigs. The band consists of Ryka, an octoling and Koris, an inkling.

Ryka‘s has translucent white hair which fades to orange, two of her tentacles are made into buns. Her bright orange eyes aren’t connected like many other octolings and have dark orange triangle-shaped pupils. Ryka wears a light gray vest with an orange sleeveless jacket and gloves that go to her palms of her hand with a gray underlay. She wears orange tights. Ryka has black black shoes also with gray underlay.

Koris has luminous black hair with a blue fade. Two of her tentacles stick up on each side and have her other tentacles tied into low pigtails. She has purple eyes that are connected similar to most inklings and have light purple diamond-shaped pupils. Koris wears a blue jacket over a black vest. She wears dark gray gloves with black underlay. Koris wears dark gray shorts and blue tights with black shoes that has a dark gray underlay.

Ryka was a former Octarian military commander and organised many of the defences in Octo canyon, and was 'freed' from hearing the Calarmari Inkantation. She met with Koris after running away from Octarian society. Soon they both started music band and regularly play music in splatfests.

Koris was raised in a very posh and strict environment leading to her assertive personality. Her family are one of the companies that build and design Turf War and Splaftfest stages. Koris never had long staying friends except for Ryka.

While pursuing a music career, Ryka and Koris work undercover in the depths of the ocean, they travel in a submarine that reach different locations underwater.

Free from Octarian rules, she expresses her emotions. Ryka isn’t much of a talker whenever she is not singing. However, she is not shy, she can be childish and sly. Ryka attempts to use slang words and fit into the Inkling society. She is a relaxed Octoling. Short-tempered is not one of her traits but she can be rather annoyed and irritated if provoked. Ryka do not mind performing in front of people. Ryka has great fondness for sloshers. She can be inquisitive as she questions her new enviroment.

Koris can be assertive and has an itch for order. Koris has many skills, especially in blasters. She hates sloshers due to its messy splashes. Koris talk with more formality and her posture is very good. This optimistic inkling loves to encourage and cheer on teammates. Though, she is a penchant for fair games, she would rather lose a game to a team who had lost a teammate. 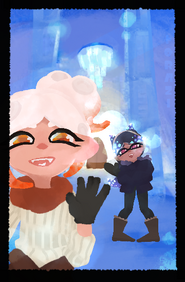 Ryka and Koris visiting the Hotel The Glace
Add a photo to this gallery
Retrieved from "https://inkidols.fandom.com/wiki/H2O_-_Harbor_To_Ocean?oldid=9205"
Community content is available under CC-BY-SA unless otherwise noted.