The band's genre is electronic metal. Using electric guitar, bass, drums and electronic music, their music can be described as harsh and powerful, yet passionate and thrilling. They also use elements of the industrial, rock and dubstep genres.

Zeal is the band's lead vocalist and guitarist. Originally part of an underground music revolution hiding from DJ Octavio's rule over octarian society, the octoling known as Zeal took no pause upon surfacing to Inkopolis. Forming the band Hadal Zone, he has found like minded individuals who also like to break from the norm and imbue passion into the world. He carries the band ever higher, pouring his soul into each performance, with a fervor that inspires even other bands to give it their all. Not much is known about Zeal's personal life, but he does make many public comments supporting other bands and artists, with a keen eye for those who share his views and devotion to music and its impact on society. Rumors have spread that he is secretly in a relationship with Obsidia's superstar Riva, something believable considering she is one of his biggest fans.

Onyo is the band's DJ and second vocalist. A rather peculiar individual, Onyo is an inkling of many obsessions. From a very young age she adopted countless hobbies that carried on into her teens, but her favorite was music mixing. One of the most prominent electronic artists of recent times, she planted this skill not just onto her original music, but onto her voice as well. She sees herself as the main instigator of the band, playfully competing with Zeal to see who can shout their heart out the longest. She loves her fans, and engages with them all the time - from responding to every piece of fan mail to making surprise appearances at karaoke nights across the country. Her quirky personality extends to the rest of her hobbies as well, which consist of but are not limited to: painting, podcasting, video game streaming, interior designing, ice skating, gardening and ranked Tower Control.

Onyo is Lumi's older sister. While not as close to her family as Lumi, she still cares very much about her sister, as far as messaging her every day and wishing her the best on her performances. Lumi had begun to produce electronic music in a similar style to Onyo, and she couldn't be any happier about it.

She is also best friends with Ketsuki, and often brings her to hang out with the girls from CoralStar. This has lead to Ketsuki becoming friends with Riva, who shares an interest in fashion design.

Ketsuki is the band's bassist. A bloodybelly comb jelly from overseas, she ran away from her strict life in pursuit of metal music. Still trying to learn the many languages of Inkopolis, her broken dialect has adopted an unhealthy amount of slang words which has become popular among her fans. She often hangs out with Onyo, who insists on showing her around the colorful cultures of Inkopolis. She likes to design clothes in her spare time, taking inspiration from urban life and from her nightly walks on the beach - some of her designs have even made it into production in the Obsidia brand. On the stage, the band uses minimal lighting to let Ketsuki's natural luminescence make an impression - something which the band has now incorporated into their outfits to embrace her image which the fans love.

Kowa is the band's drummer and is a hagfish. Despite his terrifying appearance, he is one of the most altruistic people you could ever meet. He is very kind-hearted and willing to set aside much of his own time to help others, often promoting charities and donating much of his income to assist those in need. Kowa is the son of a renowned chef, and although his passion lies mostly in music, he also has a knack for the culinary arts - if Kowa's cooking tonight, his friends can bet it'll be an amazing meal. It makes him very happy to see both the band and his close friends appreciate his generosity. When it comes to personal interests, Kowa is a big fan of foreign animated series, and has a large collection of merchandise. His favorite movie is Ghost in the Shellfish. 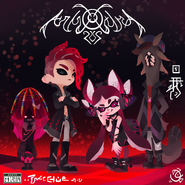 Retrieved from "https://inkidols.fandom.com/wiki/Hadal_Zone?oldid=10106"
Community content is available under CC-BY-SA unless otherwise noted.