Huomi, on the left, and Saturn, on the right.

High Pressure is an idol group consisting of a vampire squid named Huomi and a seven legged octopus named Saturn. They specialize in electronic music, combining jarring, rock instruments together with lo-fi melodies.

Huomi is a 17 year old cephalopod based off of the vampire squid, thus not inkling or octoling. Her ears are similar to an inkling, but more rounded. Her tentacles fade from dark brown to tan, and there is a thin veil connecting them. Her tentacles have yellowish spots, which can light up whenever she wants, as she is a vampire squid. There are also a pair of cirri on each tentacle. Her eyes are magenta, as well as her stockings and shoes. Her cropped sweater is black, as well as her gloves and shoes. She has fins coming from the front of her tentacles. Her hands are webbed.

Huomi is a usually calm cepholopod, she doesn't make rash decisions and is suprisingly collected despite what her music portfolio suggests. She isn't excitied by many things, but she does show an excessive reaction to Splatfests and music she loves. She seems to have a villainous mindset, which shows when she defends her side during Splatfest introductions, but it is usually very mild. Despite being a rock star, she gets tired easily when using too much energy - such as loud singing, social events, and heavy physical activity - which is why she is calm with her movements outside of her rock career. She claims that she also stays calm because she can "channel the anger into another song later."

Saturn is a 17 year old octoling based on the seven legged octopus. She has three curled tentacles - one on her left side and two in the back. She also has a bang to the right. They fade from silver to dark yellow. Her dress is white with green edges and has a light blue bow tied in the back. Her shoes are also light blue. She wears white gloves coming up to her elbow.

Saturn is usually very quiet, refecting the type of music she produces. She doesn't like especially loud or jarring noises - this is the reason why some of Huomi's instruments are toned down in their music. Saturn is very introverted, but Huomi seems to have broken her out of her shell a little and now she can be quite talkative. However, her voice can still be hard to hear. She likes to reminisce often, thinking about her childhood and basing her songs off of them. Her emotions do not go into the extreme; her overjoyed expression can be mistaken as someone regularly smiling for the camera.

Huomi rose in popularity through rock and occasionally metal songs, using lyrics of everyday undesirable events, like being back stabbed, going through heartbreak, and sometimes even including the topic of loss. Since her songs featured such common incidents, she gained a following very quickly. Many listened to her jarring, messy melodies and relatable lyrics because they seemed to accurately portray the despair they went through.

Saturn rose to fame with quiet, lo-fi type songs that she released on the internet. There are no lyrics, but the composition triggered nostalgia in the listener. Most left comments about how her music allowed them to relax and calm down, reducing the amount of stress they feel. This caused her songs to go viral on the internet, and she soon became a popular music producer.

The two met through a music competition. Huomi and Saturn were set to go up against each other at first, but Huomi decided to research into Saturn's work and realized that their styles were completely different. She contacted Saturn, and they decided to form into a single group, merging their styles. Even after the competition was over, they stayed together and created music to combat the stress of daily life. Their unique style earned them an invitation to broadcast the news for Inkopolis, while residing in the center of the city - the District of New Inkville.

(Please tell me if the Splatfest ideas are already used, I'm going to make promotional art for them) 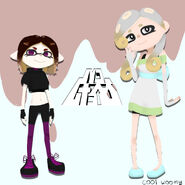 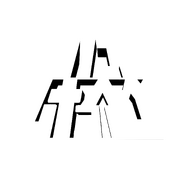 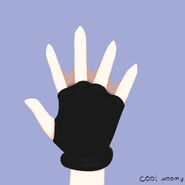 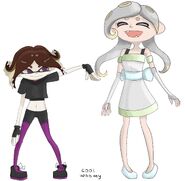 High Pressure at Tokyo Tower
Add a photo to this gallery
Retrieved from "https://inkidols.fandom.com/wiki/High_Pressure?oldid=10079"
Community content is available under CC-BY-SA unless otherwise noted.