They were created by Funny Marie and RachelSadLemon

Sina is a 17 years old sunflower starfish with many short gray tentacles. She is quite low, only 147 cm. She wears a dark turquoise sweater with long black sleeves, a turquoise skirt and white sneakers with black shoelaces. Her eyes are blue, like Fabi’s. Sina's ink color is turquoise and present at the tips of the tentacles. The turquoise parts of her outfit change color during splatfests.

Sina has cheerful personality.She is optimistic and joyful, constantly smiling, especially during greetings.Sina is energetic and almost never upset. Different ideas often come to her.It happens that Sina lose countenance when she seems something bad.

Sina was born alone, she had no brothers and sisters.As a student, she became interested in singing and creativity.Sina studied well, but was in no hurry to improve her skills and use her vocals, she only worked a little on her voice and thought about creating covers.When Sina no longer wanted to live with her parents, she moved to Inkopolis.There she lived a normal, fun life until she wanted to be who she became.

She most often writes lyrics for songs and sings more parts.

Fabi is a 17 years old ribbon moray eel with long lilac hair like «tail».The back side of the «tail» is black as a bang.Fabi is not tall, only 155 cm, but still taller than Sina. She is wearing a black sweater with white sleeves, a lilac skirt and black sneakers with white shoelaces. At the back of head, Fabi wears a large white bow with a lilac heart in the center. Her eyes are blue, like Sina's, under each of them there is a lilac triangular mark.The lilac parts of Fabi's outfit change color during splatfests.

Fabi is calm and chill, it may seem that she isn’t happy at all. Fabi behaves with restraint in any situation, and you can see only a small smirk on her face.She is rather mysterious like most moray eels.Fabi sometimes unknowingly scares Sina and some fans.She lives for pleasure and behaves quite relaxed and serene most of the time.Often, Fabi writes pretty good music without any need and never uses it again. She goes around the house at 4 a.m for any reason.

Fabi was absolutely ordinary moray, without any life purpose, until for some reason she began to make music.She has left a bunch of different diplomas associated with continuing education.Fabi moved to Incopolis to start studying again in the another place.Parents considered her behavior strange, as Fabi abruptly began to study music a lot, but were not against.The reasons for this are still not known, maybe because no one dares to ask Fabi about this.During her studies, she began to actively upload music to the Internet under the nickname OctoEater. Having gained some popularity, Fabi was able to earn money.She decided to stay in Inkopolis and continued to live writing music for her pleasure.Fabi did not want or could not unite with someone for a long time, perhaps because of her low social skills.

Was she a little weird at the time?

Fabi writes absolutely all the songs and sings a little, although he does it even better than Sina. 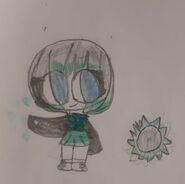 Fabi
Add a photo to this gallery

Retrieved from "https://inkidols.fandom.com/wiki/Ink_Hearts?oldid=7945"
Community content is available under CC-BY-SA unless otherwise noted.