Inktank Quintet is an all-female vocal group made by Saki and Luka as a collaborative project. They are based on the Japanese band Kalafina and the main characters of Madoka Magica.

A cheerful yellow sea anemone girl and the oldest leading member of the group. She has long neon yellow tentacles that fades to turquoise. She styles it like that so Charlie could play the strings using her hair. She wears a teal dress with scarlet frills and yellow ribbons, a brown beret with a white fur charm on it, (Which Charlie resides on,) and brown stockings with yellow heels. Her eyelashes are teal-colored and her pupils are shaped like flowers.

Cande's wealthy parents died of an accident, which left her with their giant fortune. To cope with loneliness, she has a clownfish companion and friend named Charlie who lives on her head and uses her tentacles as harp strings. She was the one who started the group. In her spare time, she likes hosting tea parties with her friends, especially her bandmates. She is based on Mami Tomoe and her witch form.

She has a silvery and soft female voice that brings hope to all who listen. Her bandmates look up to her for the sheer awesomeness of her work ethic. During live performances, she sings and plays the vibraphone while Charlie uses her hair to play the 'harp'.

A clownfish who lives on Cande's head and plays the strings. Charlie moved in with her anemone friend after it was finally time for her to find a symbiotic host. She has a big appetite for a tiny creature and loves eating anything with whale or manatee cheese on it. Charlie uses the tentacles of her anemone host to play it with a bow, creating a unique harp-like sound. She can be very destructive when hungry, and sometimes tries to eat Cande’s head. She is based on Nagisa Momoe and her witch form.

A blue-ringed Octoling girl with short hair and a fan of Octorchestra music. She has light blue eyes with crescent-shaped pupils. Her tentacles are normally blue and turn bright yellow with teal-blue rings that only shows when she is threatened or sad (with the exception of the album cover, where she is doing it aesthetically). She wears a translucent short cape jacket on top of a dark blue shoulderless crop top that exposes her diamond-shaped belly piercing with a diagonal-cut dark blue skirt, and one white stocking on her right leg with blue clogs. Her fingers have a blue gradient on the tips.

After hearing the Calamari Inkantation, she escaped to the surface with her crush and childhood friend, an Octarian violinist. However, after the escape, he got the opportunity to become famous and cut ties with Octavia to chase his violinist dreams (and some girl). This left Octavia heartbroken and alone, wandering around the lonely streets of Inkopolis Plaza alone trying to make a living out of her siren-like singing voice.

When a former solo singer named Ophelia found Octavia singing in the annual youth contest, she befriended her and provided her shelter. Both girls tried to audition for an idol spot in Inkopolis Outskirts, but went into the wrong room and got into Cande's approval to join Inktank Quintet instead.

Despite being naturally venomous, she is very gentle towards others. Octavia has a serene and sad voice that makes those listening to it feel melancholic and emotional. She is based on Sayaka Miki and her witch form. She plays the ukulele, acoustic guitar, strings, and bass for the group.

A strawberry Inkling girl with flat-cut bangs and a long ponytail tied with dark red kelp. Her tentacles are colored red with small dark spots sprinkled over it. She has one droopy blue eye and one upturned green eye, both with vertical thin oval pupils, which is a trait exclusive to her species. She wears an open sleeveless maroon dress and one black stocking on her left leg with black metallic heels.

Before joining Inktank Quintet, she was a former solo indie rock singer who abruptly left her career after her religious family went into a serious scandal. After befriending a certain Octoling, she got the chance to get back to music. Although she's pretty arrogant at times, Ophelia is quite kind around people who're close to her and won't hesitate to help her friends out whenever trouble strikes. Her favorite foods are candied apples and pocky.

She is also known to be deeply religious like her family, worshipping an ancient Cat deity often found in the shrine of Inkopolis Outskirts. Ophelia has a sturdy and often upbeat voice that cheers and inspires people up when they're down. She is based on Kyoko Sakura and her witch form. She plays traditional percussion and flute for the group.

A mysterious Draculing girl who has long black webbed hair with hints of purple. Her eyes are colored purple with diamond-shaped glimmers. She wears her two red filaments like a bow, tying them up onto her head like a headband. She wears a short black dress with puffy sleeves and white buttons, along with purple mary-jane shoes. Lily carries a pink starfish plushie around and cuddles with it frequently. Before revealing herself as "Lily" to the public, she used to compose underground ambient music under the alias of "Miss Eurydice", which is pretty well known to the deep sea denizens and dome cities below the ground.

She composes the instrumental and lyrics for the band. Lily only goes out at night since her species is intolerant to sunlight. As a child in the infamous Bigfin Orphanage, she was pretty weak and wasn't allowed to leave her room, but had a fellow Draculing friend who helped her cope with illness. The girl then disappeared without a trace, and many years later, a grown-up Lily left the orphanage without anyone to say goodbye to. Years later, after she made her last solo album as Miss Eurydice, Lily was invited to join the band after meeting Cande at a formal night party. Although she's happy with her bandmates, she secretly hates their manager for his complicated risky contracts.

Lily rarely sings, but she often put her strange yet beautiful thoughts into song lyrics for the band to sing. Until this very day, she still yearns for her childhood friend to return home safely and reunite with her. Lily's character is based on Homura Akemi and her witch form. She plays the keyboards for the group. 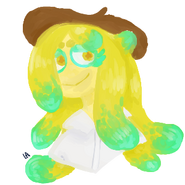 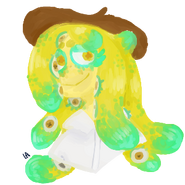 Another Lily fanart by Komi10

Fanart of Lily by Poker (on Caitlin Koi's Discord) 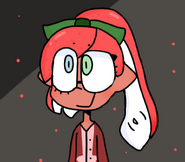 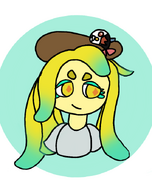 Cande and Charlie fanart by SomeHumanWow

Fanart of Ophelia by OpalTheOcto

Lily fanart by Poker (finished)
Add a photo to this gallery

Retrieved from "https://inkidols.fandom.com/wiki/Inktank_Quintet?oldid=10130"
Community content is available under CC-BY-SA unless otherwise noted.