"Don't forget to stay with the Inky Current!"

Inky Current is a fanmade idol based on the game Splatoon. These 2 idols are made by agent 7 and friends. They host the news, stage rotations, and announce Splafests in Inkopolis Center. Aka is a Cuttleling and Clover is a Octoling.

Aka is a 20 year old, 5'5" (1.65m) Cuttleling based on a Sepia mestus (aka Reaper Cuttlefish). Her hair is Indigo with rose red colored diamonds. She wears a ponytail that seems to have 1 tentacle longer than the other. Her forehead is covered by "bangs" that split into 3 notches

Her skin is a light brown color. She has a 1 bottom eyelash, her irises are a lavender purple with a pinkish purple W shaped pupil. Her fangs are the same like an Inkling girl's fangs.

She wears pink sunglasses on her head and wears black collar vest that has a rose red squid on it. She wears knit boots that are the same color as her hair.

Clover is a 21 year old, 5'6" (1.6764m) Octoling based on a Amphioctopus marginatus (aka Coconut Octopus). His hair is a Light sky blue color with mint green colored ovals. He has 7 tentacles instead of the usual 4. His ears are more shallow than Marina's and the playable octoling. He has similar "bangs" to Aka.

His skin is a light peach color. His irises are a magenta like color with a sideways blue diamond shaped pupil. His fangs are the same like an Octoling boy's fangs.

He has a sliver ear cuff on his left ear and wears a zipped up collar vest. He wears the same shoes as Aka but it is the same color as his ink color.

Aka grew up in a big city that is known as Los Angelfish, that was known for it's popularity. As a kid, Aka wasn't really that bright when it comes to making friends, she would often be called "weird" or "Diamond freak". This often made her think that her appearance was horrid. As time passed she found her love in designing clothing, designing got her to forget the name calling and helped her focus on things she liked work on. She now owns a clothing industry called Opalia and was known for her skills as a professional blaster user. Aka came to Inkopolis Square from time to time to take a break from the business and met a certain someone that caught her eye.

Clover was a former soldier in the Octarian army. He was known for being at the top of his league in the Splatlings group, like many other Octarians, he was misled with lies and followed orders without question. One certain day, all of the Octarians gathered around in the stadium and watched as DJ Octavio fights Agent 4 and Marie, when Spicy Calamari Inkantation started to play, all of the Octarians cheered in excitement, this is when Clover started to see the light. After the battle, Clover safely came to Inkopolis Square for a fresh new start. He abandoned his past and started his new life in Inkopolis, hoping for what awaits him in his brand new life on the surface to be worth the wait.

Clover and Aka both met on Skipper Pavilion after a match and started to hang out more due to them having the same interest in liking music from Off the Hook and the Squid Sisters. They been best friends ever since that day.

After some time passed, Aka came to Clover about starting a band together. Clover was confused at first but agreed. At first, they weren't sure what genre they should go for, but then decided to make it into a pop genre because of their inspiration from the Idols they look up to. When they made their debut of their first song, the ratings went off the charts. Some time later, they moved to Inkopolis Center and became the new broadcasters for Splatfests and News.

Aka is known for her childish and optimistic behavior. Even though she may not look like it, she is very dangerous when it comes to turf wars. She often likes to get up and close to her opponent only to splat them with her blaster. She has a liking to spicy food and trying new things sometimes. She rarely gets angry, but when she does, things become very messy and chaotic. She makes the lyrics for their songs that brings the energy and fresh lyrics out with a bang! With her fashion sense (and her jokes) she brightens up the world with her smile.

Clover is known to mess around with Aka sometimes and is often the one who splats the most in turf wars. Clover keeps this a secret from everybody except Aka that he likes sweets, he eats a lot in private but apparently his physical appearance doesn't change. He often looks like he doesn't have emotions a lot but he just has a hard time showing them sometimes. He puts his beats and soul into his computing and music making. With his fresh beats, he keeps their fresh flow ongoing! 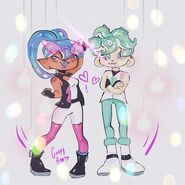 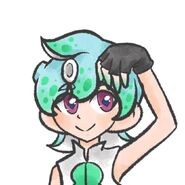 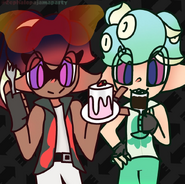 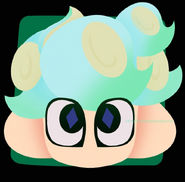 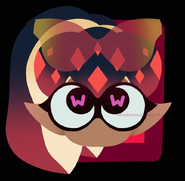 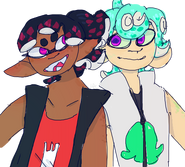 Art is drawn by Nautilus1996
Add a photo to this gallery 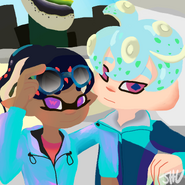 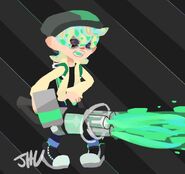 Is an entry for the 100 wiki page celebration

Inky Current with other idols 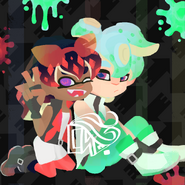 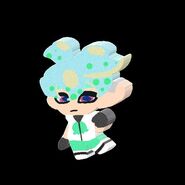 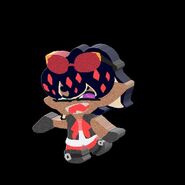 Add a photo to this gallery
Retrieved from "https://inkidols.fandom.com/wiki/Inky_Current?oldid=10162"
Community content is available under CC-BY-SA unless otherwise noted.