Lowpoly Ink (デンパクルイ Denpakurui) are a self-proclaimed “anti-idol” duo in Inkopolis Promenade, consisting of Pixel (ユウドウ Yuudo) and Arcadia (メンダ Menda). Following suit of the Squid Sisters and Off the Hook, they host the Inkopolis News and Splatfest Events in the Splatoon 3: Order Ver. alternate universe concept by Biscottiel and Squid Maker.

Slick (At an angle); Short with bangs

Pixel is a tall inkling with slicked back tentacles, his primary ink colour being blue. He wears a pair of safety glasses on his head balancing on his tentacles, and a squid hair clip on his left hand side. He has two drawn on flicks on the sides of his mask, matching Arcadia's eyelashes, however these are purposely drawn on. His outfit consists of a black short-sleeved shirt with a white waistcoat on top - which has 3 blue triangles facing downwards down the front, and the same writing seen on the White Tee and Black Tee similar to "いか". He also wears an untucked blue tie. As well as this, he wears a pair of white fingerless gloves secured at the upper arm with Splatfest attendance bands. He wears blue shorts with black leggings, and white and blue shoes with the same triangle design as his waistcoat.

Arcadia is a short octoling with 2 tentacles forming bangs, and the remaining two wrapping around the side and back. The sides and back of these tentacles are cut in a different fashion to give the illusion of a more complex haircut. She has slightly hooded eyes with two distinct eyelashes at the bottom, and a purple mask like an enemy octoling. Over her eyes, she wears a pair of safety glasses, alongside an octopus hairclip on her right hand side. She wears a similar outfit to Pixel albeit inverted - with a white shirt and black gloves. Her waistcoat is black with a pattern of 3 triangles facing upwards on the front, her tie also being loose from this overcoat. On the back, there is writing resembling the Octo Tee's text reading similar to "たこ". She wears a skirt, white tights and similar shoes to Pixel's, once again with the colours and design inverted.

Pixel is loud and outgoing unlike his co-worker, being very outspoken and comedic. Despite his mostly carefree personality, he can be serious if the time calls for it and is very hard working. He is very creative and competitive when it comes to both turf and ranked battles, caring for his teammates, and deeply so for Arcadia. Being the stronger battler of the duo, he gets protective over her.

Arcadia is a lot quieter in contrast to her co-worker, but puts on a faux-confident personality for her act, especially when it comes to songs and stage presence. She is considerate and caring but can be put in a bad mood relatively quickly. She is still hard working, but somewhat lazy in comparison. She cares about Pixel a lot and often tries to drag him out of situations his competitive attitude gets him into.

Pixel is an elite in ranked battles and big-name tournaments. He started practising with turf war as soon as he could control his inkling and squid forms age 14, making a name for himself as he started competing in Splat Zones, Tower Control, Rainmaker, and eventually Clam Blitz battles and soaring up through the ranks. As things currently stand, he has been an X rank inkling across the board for 2 years. He met Arcadia when he was waiting for his first Clam Blitz battle at the mode's introduction.

Arcadia is an ex-Octarian soldier who never passed the training stages from timidness. She escaped from Octo Valley after hearing the music of the Squid Sisters, and began practising music and releasing indie EPs under the moniker A.B. Angler. In her free time, she actively practised at the dance game located outside of The Shoal in Inkopolis Square, becoming a talented freestyle shuffler. Upon meeting Pixel as he was preparing for a turf war age, they started talking and gradually became friends, eventually forming the idea of forming a non-conforming idol group. 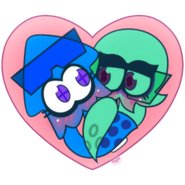 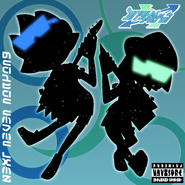 Album Artwork
Add a photo to this gallery

Retrieved from "https://inkidols.fandom.com/wiki/Lowpoly_Ink?oldid=10094"
Community content is available under CC-BY-SA unless otherwise noted.