Yuzi doesn't usually show so much emotion. She's quiet and calm. She puts a lot of effort into her work.

Yuzi was a "testing object" in Deepsea Metro, just like all the sanitized octarians. When she was 16 years old, the system of the metro crashed awhile, so she could escape. After the defeat of TarTar she started to live in Inkopolis. The Inkopolis citizens were treating her as a nice octoling with weird eye and skin color.

Yuzi plays the violin and does the vocals if needed. Even though her voice is distorted, she can sing very well.

Kamuru is a 23 year old inkling with a pretty low voice. She has grey shiny hair. Her skin color is white, and her eye color is red. She wears a dark grey shirt with a white bow, grey pants and black boots.

Kamuru is an optimistic person. She inspires her bandmate to to her best. She's not such an extravert, but she sure does have some charm.

Kamuru started studying at a music academy at the age of 7. She graduated it successfully when she were 16. She's is badly experienced in bands, because she sadly couldn't team up with other musicians she've ever met. After this, she decided to improve her teamwork skills.

Kamuru plays the synth and also does the vocals sometimes.

Yuzi and Kamuru met in the internet, while Kamuru was searching for someone to make a duet together. Yuzi really wanted to start a music career with an inkling. 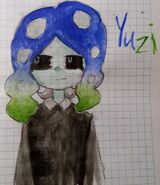 A Yuzi art (by Nira) 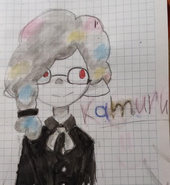 A Kamuru art (by Nira)
Add a photo to this gallery

Retrieved from "https://inkidols.fandom.com/wiki/Painted_Path?oldid=8887"
Community content is available under CC-BY-SA unless otherwise noted.