Due to Off the Hook having stepped down from the news in order to further pursue their music career, Picture Perfect would go on to take their place, now serving as the current fresh idols and newscasters.

Fil (JP: きら Kira) is a 28 year old Glittering Cuttlefish. He serves as the main vocalist of the duo.

He has fair skin with magenta eyes that are patterned with a "W" shape. Due to having been born with Breviartus Syndrome, he only has four tentacles (two at the front and two at the back). Said tentacles are brown and gradient up to cyan, which in turn gradients to gold near the end. He also has white dots that go around the edges of each of his tentacles.

As for clothing, Fil wears a waistcoat suit with long coat tails over a white shirt and yellow striped tie. The waiscoat also hase a cyan decorative stripe going down the right side of it, slightly resembling a film strip. He also wears a pair of grey jeans and black and cyan boots.

As for accessories, he wears a pair of black fingerless gloves and wears a few small white piercings around his lower ear, mirroring his tentacle pattern.

Shuta (JP: ドス Dosu) is a 26 year old Armhook Squid. He serves as the music producer as well as the secondary vocalist for the duo.

He has medium dark/tanned skin with cyan eyes patterned with a horizontal line. His tentacles are a light grey and gradient down into a gold color, which in turn gradients to cyan near the end.

His clothing is similar to Fil's, however differences are that he lacks the coat tails, has a cyan bow tie, wears a belt colored like his ink, and has a circular pattern on the left side of his waistcoat, resembling a camera apeture. He also has his sleeves down with a pair of armbands on each side.

As for accessories, he wears the same fingerless gloves as Fil as well as some black ring peircings ont he bottoms of both his ears.

Fil is the typical "snarky straight man" of the duo, often appearing to be a bit more on the stoic and composed side of things. This being said he cn have a tendency to lash out on rare occasion if too much pressure is put on him. Despite all that, it's very clear he cares for others, especially his partner, Shuta.

Just like Fil, Shuta is your typical "ridiculous funny man". He comes off as a little smug but all around playful. He seems to be very patient with others and is always willing to listen to their problems, however. He seems to have a very close friendship with Fil, probably due to that.

Fil was born somewhere in the outskirts of Inkopolis City. Growing, up, whilst he did have a few friends, he otherwise didn't have alot of interaction. This lead to a somewhat distant attitude. After moving to Inkopolis proper for education purposes, he would soon meet up with Shuta, who was attending for the same course that he was doing: music.

Shuta already had some small knowledge of music, but he made the decision to study it to get a much better grasp at it. The two started talking with one another (though given Fil at this point in time, it was a tough start) and eventually became a pair of close friends, even leading to Shuta helping Fil overcome his distant attitude.

After both of them graduated, they decided to form a duo, dubbing themselves as Picture Perfect, due to a side hobby Fil had with photography.

Whilst the two did slowly build an audience with their early music and performances, they would only jump into a bigger spolight after Off The Hook announced that they were stepping down from Inkopolis News due to the desire to further pursue their music career.

Once Picture Perfect were able to win the auditions, it seemed clear that the two weren't completely accepted at first, probably due to others feeling they wouldn't live up to how great Off The Hook were. This would change once they hosted their first splatfest, "Classical vs. Electro", to which their main performance quickly stole the hearts of the majority, finally netting them a good reputation among the people of Inkopolis.

Picture Perfect's Logo
Add a photo to this gallery 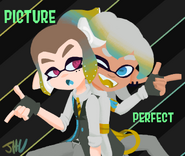 Retrieved from "https://inkidols.fandom.com/wiki/Picture_Perfect?oldid=10141"
Community content is available under CC-BY-SA unless otherwise noted.