Null is a 19 year old sea urchin with purple and black hair. Her eyes are purple. She wears a delicate purple t-shirt with dark purple sleeves, as well as purple shorts that look like Callie shorts.She wears blue shoes.

Tomi is a 20 year old sea snail with pink ink and hairstyles. She wears a pink T-shirt with dark purple sleeves, a pink skirt and purple boots.

They met when they were both 8 years old, they were fans of Squid sisters and dreamed of becoming as popular as they are. And at 18 they created their duet.

Null is very calm; she is rarely cheerful. She likes Marie from squid sisters, she even looks like her. It is quite easy to offend her because she takes everything seriously.Sometimes she can accidentally hurt Tomi’s feelings.

Tommy is very funny and similar in character to Callie. Despite the fact that she and Null are best friends, they can quarrel over trifles but quickly reconcile. She can always calm Null when she is sad. 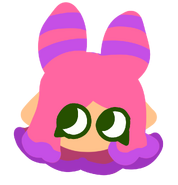 Add a photo to this gallery
Retrieved from "https://inkidols.fandom.com/wiki/Sea_Colors?oldid=5775"
Community content is available under CC-BY-SA unless otherwise noted.