Sea Stars is a fanmade Splatoon Idol duo made by Artsy Rose. They host Inkto News and produce songs for all to hear.

Diver is an Octoling of the species the seven-arm octopus, at the age of 20. Her hair is a cream colour, with a light, pastel pink along with a hint of magenta. She has two tentacles past her ears, along with two long tentacles behind her tied with blue bows. She has rounded, pointed-down ears and lightly tanned skin. She has dark magenta irises with orange pupils, lined with curled eyelashes. She has a fang to the far left and one in the middle.

Diver’s clothes consist of a short tank top, with wavy ends. Her belt has their signature frilled bow that resembles a target, and has her long dress that flows down past her knees, with a pattern at the end of the skirt that resembles waves. Her tights cannot be seen, but they are the same as her ink colour. Her boots and head accessory have an octo and a squid, showing the equality of the two species. Her gloves, like Umi’s, have wavy ends. She has hoop earrings.

Her signature colour is pastel pink.

Diver was always a stubborn and outgoing person. She’s always wanted to make friends, wherever she was, but many people just ignored her. Most of the time they just wanted to concentrate, and she was just not talking to people at the right time. Her stubborn ways led her to feel more disappointed with herself and made her want to be so liked, that she began not being herself. She could only ever concentrate on the things she loved, which was making friends.

After a while, she went to battles. She was never really a good player, but she got money out of the ones she won, and found a few people there. She usually played with the inkbrush and found ways to cleverly (but annoyingly) flank the opposing team. With her excitable and fast nature, she easily got around. She’s still not the best though.

She then found her love for music. She heard it so much, but never ever got tired of it. She got invested in it, especially with Chirpy Chips. She loved everything about the band, and spent her money on merch. The Calamari Inkantation was another song she adored.

When Splatfests would begin, she would love to watch the idols dance. She would watch them for ages, wanting to learn their hypnotic dances. That’s when it sparked her interest, and she would always use her spare time practicing. She liked making her own dances to songs, but preferred dancing to Squid Sisters songs choreography.

Umi is a vampire squid at the age of 19. Her hair is a dark, chocolate brown with a cyan tint and a touch of green. Like Diver, she has two tentacles framing her face, and two short, webbed tentacles tied with light purple bows. She has pointed ears, going up. She has light brown skin, and has dark, ocean blue irises with bright, forest green pupils. She has webbed-like eyelashes. Her fangs are sharp, and are like an Octoling’s fangs, one on top on the right, and one on the bottom, on the left.

She has a short, dusty blue poncho covering her shoulders, with a pearl joining in the middle. She has a short, simple light purple dress on, with a pinkish-purple belt in the middle. Her tights are the same as her signature ink colour, cyan. Her boots have a web-like feature too, with ribbons hanging off. Her hair accessory is their frilled bow, same as Diver’s belt, but instead she has more webbed features. She has the same gloves and ring earrings as Diver.

Her signature colour is cyan.

Umi was born as an excitable person, but it soon changed when she started getting called names as she was a vampire squid. People would relentlessly bully her, and she would always be self aware of what she was doing at all times. She had a lot of built up anger and stress and desperately wanted to let it out.

She sometimes worked in cafes as she always loved the calm atmosphere. She also liked baking, but she dropped it after becoming an idol. She has always wanted to get back into it and has wanted to make stuff with and for Diver someday.

Then she found her talent; singing. She loved writing her own tunes, and singing along to songs she loved. She preferred listening to calm, quieter music, such as some Dedf1sh songs. She started doing it in privacy, but sometimes she would go to a quiet place to sing in public. But her bullies found her. She was insecure yet again.

Soon after that, she found herself wrapped up in turf wars. Playing with mostly long-range weapons, such as splatlings, she was a beast. Her anger and rage was let out whenever she played turf war and she scared them off. She still felt afraid though, until she found Diver. Unfortunately, she had to drop playing in turf wars regularly because of fans getting distracted by her.

Diver was always wanting to start conversations with all other Octolings. She could get distracted rather easily wanting to make friends. Most people wouldn’t respond, as she was either meant to be working or seemed weird to others. When she climbed to the surface, she was extremely excited knowing how many friends she could make. There, in Inkopolis, Diver found her love for music. Hearing all the different songs played everywhere, she grew to love being there.

Growing up in Inkopolis made her more of a messy person, but usually keeping herself as tidy as possible when it came to important situations. She still had standards, after all. Her cravings to be liked got her through some situations, but it never really got her any good. She knew a lot about things she loved, so it was a surprise when she would endlessly spit out facts that many people don‘t know.

She went to turf wars, not really knowing what to expect. All she knew was that she could make some money, and, of course, make new friends. She grew over time with her speedy and stealthy ways. She was constantly on her feet, making sure every bit was covered while killing others in the process. She made some silly mistakes here and there, but never learnt from them. She never really thought of the idea of ranked, but she threw herself into ranked. It didn‘t work well at all, and after that, she never played in ranked again, until she was older.

Umi grew up in the city, but after being called names, she felt very overwhelmed. She usually covered herself up, wearing gloves, putting makeup on, covering her face and such. Underneath all of that she has sharp fangs and webbed fingers. Her love for music and singing unfortunately failed, so she had to find another way through. Mainly using long-range weapons (especially the splatling), she became outstandingly strong. People no longer made fun of her, and she found a new source of entertainment and joy. She became happier but she was still not completely herself.

One lucky match, they fought together. Umi, with Diver’s help, destroyed the match. Saving and helping eachother, they were a great team. Diver went to go talk to Umi after, and soon, a friendship blossomed. They started hanging out together, and Umi shared some tips with Diver. They got better together, and built eachother up. Together, they felt more happy, confident, and comfortable. One day, Umi started singing out and about again. Knowing the bullies were gone, and she felt more confident, she wanted to do what she wanted again. Diver found her and caught her by surprise; they soon started making music together, and they both were excited to share their music. They started of with a small following, but with more and more hard work, they became popular! After many different creatures came to the surface, Inkto was built, and they moved there. Umi really wanted to move to Inkto knowing how many different creatures would be there. Being immensely popular, and by popular demand, they quickly became the next idols.

Now, they make sure to spread the acceptance of everybody, and they continue to grow. Umi tries to accept herself and Diver cares less about what people think. They both continue to support eachother and make the best things they can, including the best future. 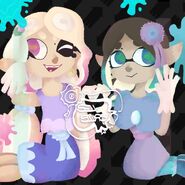 The art for the Maths vs English Splatfest.

The art for the Sunlight vs Rain Splatfest.

The art for the Chicken vs Egg (rerun) Splatfest. 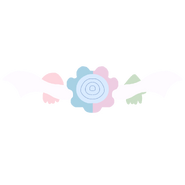 The Collab art between Sea Stars and Mermaid Tears for the Trick vs Treat Splatfest (rerun).

The art for the Cute vs Scary Splatfest.

The art for the Maths vs English Splatfest (remade),

An artstyle test, based off the Pancakes vs Waffles Splatfest.
Add a photo to this gallery

Chocolate Vs Strawberry fanart made by Charachimeco.

Chocolate vs Strawberry Outfits made by rateatplatsicbagasmr on Deviantart. 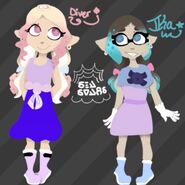 Fanart made by J L C on YouTube (old designs). 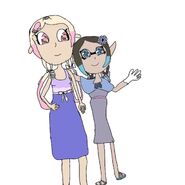 Fanart made by Alex Mations on Youtube (old designs).

Splatfest Request made by Yuii Yuzukii.
Add a photo to this gallery

Retrieved from "https://inkidols.fandom.com/wiki/Sea_Stars?oldid=14708"
Community content is available under CC-BY-SA unless otherwise noted.