"Life is breif, so party in the reef!"

SunReef is a fanmade idol duo that is based on the game Splatoon and created by KRAKEN.AT.YA (she has a main name but uses KRAKEN.AT.YA for Splatoon related content). They host the news, splatfests, game modes and such in the ReefBay Gallery. The duo is made up of Dew, an inkling and Isla (Ih-la), an octoling.

Dew is an 18 year old, 5'5" Caribbean Reef Squid. Her hair is cream colored with her tips being tinted neon purple. She has bangs with three slits, a large one in the middle with two smaller ones on the sides. She has four tentacles that are located in the front and on the sides of her head and two large ones in the back. As an accessory, she wears a purple jellyfish bell on her head.

Her skin is a pale, cream color going into a light orange around her blush areas. Her eyes are a soft pink with black, crescent shaped pupils. She has excited eyes and her lashes go upward. Under her right eye she has three upside down triangles, similar to how Isla has them under her left. Her eyebrows are tilted down and give her a bit of an on edge expression. She has a mischievous smile and her teeth are that of the standard inkling.

The clothes Dew likes to wear are more on the rebelious side that match her chaotic personality. She is seen wearing a black crop top complemented by a neon purple sleeveless jacket with highlights of white, light purple pants that fade to black at the bottom, and black ankle boots with purple heels. She also wears a neon purple arm sleeve on her right arm.

During a splatfest, the tips of her hair change into her side’s colors, along with her hairpiece, jacket, pants, the heels of her boots, and her arm sleeve.

Isla is a 19 year old, 6'5" octoling that is a Caribbean Reef Octopus. Her hair is chocolate colored with neon green ends. The underside of her head has a shaved look to it while she has three tentacles that hang down and two other tentacles in a bun with two hairsticks keeping it up. In the front, she has an extra tentacle that is shorter and curls at the end, making it look like a shorter piece of her "bangs". The reason to her having an extra tentacle is due to a mutation gene.

She has light brown skin that has a pinkish hue in blushy parts of her body. Her fingertips are pointed making them look like nails and are tinted green (similar to Marina from Off The Hook). Her eyes are white with a hint of blue in the middle and has purple wave shaped pupils. She has tired looking eyes with lashes that go downward. Under her left eye she has three upside down triangles, similar to how Dew has them under her right. Her eyebrows give her a soft, worried expression that makes her seem sad at times. She has a warm smile and her teeth are that of the standard octoling.

Isla's preferred style has more of a rave look. She wears a black bodysuit with green straps, green pants with a white pattern at the ends, and white shin boots with green heels. She also has a green choker, a green stud earring on her left ear, and green cuffs on both her wrists.

During a splatfest, the tips of her hair change into her colors side, along with her fingertips, hairsticks, the shimmer along her bodysuit, her pants, the heels of her boots, choker, her earring and the cuffs on her wrists.

Isla was born in a big city called Downtown Trench. When she was born, a mutation gene that passed onto her caused

her to gain an extra tentacle. She felt different from other people and was afraid that others would consider her a freak and make her an outcast. She isolated herself from others throughout her childhood and would never leave her house unless necessary.

Ever since she got her first keyboard as a child, she would spend all day and night making beats and lyrics. Creating music was the best way for her to express herself and it soon became something that got her started as a small artist. Her perfered music genres are Vaporwave, Synthwave, and Electronica. Even as a small musician, she still wouldn't go out and made music from the comforts of her home.

On rare occasions, Isla would go to flea markets to not be noticed by big crowds. While walking down to get some things, she bumped into someone and the mask that was hiding her face fell off. She looked up and saw that it was someone who was tall like her. They helped her up and quickly left after. She still remembers the weird yet comforting aura of that mysterious person. Isla doesn't remember much about them, only the strange glowing shades they had. How strange...yet familiar.

After living in Downtown Trench for a few years, Isla met Dew when she was attending a rock concert as a special guest and was mesmerized by her outgoing and fearless attitude. Isla went backstage to meet her and Dew was instantly interested in her unique style. They soon became friends, with Dew accepting Isla for her differences and Isla forming a strong bond with Dew. After being friends for a while, they decided to become a duo.

One day, a city suddenly boomed in popularity called ReefBay. The duo were then chosen to be the news hosts for the city and once they debuted for the first time, they were loved by everyone, especially Isla for her mutation that made her different from everybody else. When they released their first song together, they passed everyone and made it to the top and received positive feedback. They soon named themselves SunReef and became ReefBay's First idols.

Being very out and extroverted made her super confident. She takes pride in her long tentacles that are located on the back of her head. She likes to go out as much as possible and enjoys interacting with people wether they be family, friends or random people.

Her voice is very energetic and shows her animated personality. She can sometimes act chaotic and rebellious when performing on stage, thus why Isla was so interested since it contrasted against her chill and friendly personality. Dew loves her fans and will listen to whatever criticism they have to input. She is very protective over the things she loves and is very overprotective of Isla.

Since she has always been out there, she is never afraid to go out and never gets embarrassed. She has learned to laugh with people and enjoy the moment. Dew loves to participate in turf wars. She even helped Isla get into it too.

Dew is the one who speaks the most during the news. Her way of giving the news has the audience always in a good mood.

Since she spent most of her time being isolated, she is very shy and introverted. She likes to keep to herself most of the time and enjoys sitting in her ink to hide from the world when she feels anxoious. After meeting Dew, she has been a little more confident in herself.

Her demeanor is chill and loving which makes her fans feel bubbly inside when she sings or speaks. She never liked going out because of her differences. She never liked it and she got anxiety. She admires the people who help her (such as Dew and her fans).

Turf wars is something Isla would have never thought she would enjoy so much. Thanks to Dew properly introducing the sport to her, she is obsessed in playing. Her strength isn't easily outmatched and carries heavy duty weapons. The only possible thing she takes pride in is her height. Whenever she is chasing people with her Roller, they are easily scared off and try to avoid being slammed by her. Sometimes, turf war champions will challenge Isla and they are never able to beat her, except for one person. Before she could congratulate them for winning against her, they left immediately. She only got a glimpse of them while they were turning around to leave...how familiar.

Now that she is a lot more popular, she has been doing her best to go out more and interact with people since she knows that she can't hide forever. 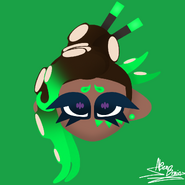 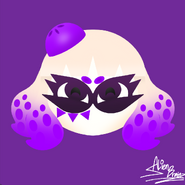 Retrieved from "https://inkidols.fandom.com/wiki/SunReef?oldid=12470"
Community content is available under CC-BY-SA unless otherwise noted.