Male (Cordys & Lyr)
TRIDENT is a fanmade alternative rock duo based on the game Splatoon. The characters were made by Lucian Chen.

TRIDENT is a new, rising underground band in Inkopolis. They have an edgy, dark, yet stylish aesthetic to go with their sound.

The band consists of two members -- Cordys and Lyr.

Cordys is an Inkling of around 23 years of age, and is the leader of the band TRIDENT. He is a new, yet distinguished performer. He is known for his captivating vocals and confidence. He is self-driven and headstrong, and that is sometimes his bane. That can get him in trouble when working with his collaborators. However, he seems to get along very well with his band partner Lyr and has a soft spot for him.

Lyr is an Inkling, around the age of 21. He is new to the music industry, but got popular on social media as a fashion influencer. He has a youthful voice that goes with his aesthetic. Lyr is reserved, but also somewhat captivating and charismatic. He can be hard to read at times, and often even he doesn't know his true emotions himself. What he hides behind that calm facade may remain forever a mystery.

Cordys is an Inkling who stands at around 5'7" or 170cm. He has light skin and a slender, somewhat athletic and lean body build. He has teal short hair and angled purple eyes, emphasizing a mature, edgy appearance, and wears an eye patch over his left eye. He wears a teal choker, a white button-up shirt that's unbuttoned at the top, and a black jacket over it with a collar and teal accents. He also has black gloves and knee-high boots with teal accents. He wears black jeans, black headphones, a teal belt, and a black loop accessory connected to his belt.

His appearance is inspired by Hatsune Miku, which reflects the music inspiration from popular VOCALOID artists like DECO*27 and kemu.

Lyr is an Inkling who stands at around 5'3" or 158cm; 5'5" or 163 with his platform shoes. He has a medium light tan skin tone and a small, petite body build. He has medium-length purple hair that covers his left eye, and rounded blue eyes, emphasizing a youthful appearance. He wears black headphones, jeans, and a turtleneck shirt with a puffy, off the shoulders jacket. He also has purple platform shoes with a black heel, a purple belt, and a chain accessory. He also has a purple gem necklace.

His style is influenced by multiple K-pop artists, notably by So-yeon's appearance in the live performance of K/DA POP/STARS.

TRIDENT has a sound that contains elements of rock, symphonic, and electronic music. 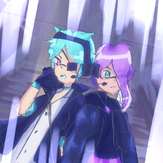 artwork visual for "OCEAN OBSIDIAN," their debut song.
Add a photo to this gallery

Retrieved from "https://inkidols.fandom.com/wiki/TRIDENT?oldid=259"
Community content is available under CC-BY-SA unless otherwise noted.