"Until next time: Let's keep it cool in the Tide Pool!"

Tide Pool, alongside Deep Dive, having been rising up the charts in New Sardine, the former being the ones who host the news and announce the splatfests there.

Barry (Japanese: マダ Mada) is a 21 year old Octoling who serves as one of the duo's vocals as well as the guitarist of the two of them.

He has light skin with yellow eyes that have an "X" shape on them. His tentacles are purple, but gradient out into a cream at the back.

Reif (Japanese: かんじょう Kanjo) is a 25 year old Octoling who serves as another one of the vocalists as well as the bassist.

He has dark skin with purple eyes that have a "+" shape on them. His tentacle are styled like a half-shaved hairstlyed, the small tentacle at the front of his hair being colored like his ink.

His outfit consists of a light blue t-shirt under a black and yellow leather jacket with a black belt, light grey ripped jeans and a pair of black boots with muted yellow soles.

Accesory-wise, he wears silver earrings that have a small ball on a chain connected to them. He also wears small, dark yellow belts around the upper arms of his jacket, three on each side.

On air and during performances, Barry presents himself as an energetic rockstar, always doing what he can to make sure all eyes are on him. In reality, he's much more mellow and enjoys being able to make friends through his music career with Reif.

Reif has his public image that sort of counters Barry in a way. He's much more serious and snarky, often known for messing with Barry on air. However, small occasions do arise where Reif tends to break character, to where he isn't as serious as he tries to paint himself to be, and is in fact quite playful alongside his aloof exterior.

(NOTE: You can find extra info on Barry and Reif on the Project Snapper Wiki!)

In the beginning, Barry and Reif were both members of the Octarian Military, Reif actually being an elite compared to Barry and leading a squad that both of them were in. It took up until the second defeat of their leader, DJ Octavio, for them to finally come to their senses and leave their militaristic lifestyle behind.

They spent a few months in Inkopolis at first, tring to find themselves somewhat and, after seeing the fame Off the Hook gained, they decided that they would ultimately try to start a band together. However, they didn't stay in inkopolis forever, catching a plane together to New Sardine in hopes they could start their music careers there.

It wasn't easy, but eventually the two started to rise in popularity among the people of the Big Snapper, to the point where they'd even go on to become the hosts of Snapper News.

Of course, they were never alone in the journey up, as this fame seemed to rise alongside Deep Dive, to the point where both groups are considered to have a "friendly competition" with one another aside from collaborations.

While they do have songs just by themselves, Tide Pool has collaborated with the aforementioned Deep Dive in a few songs, most of which being Splatfest music. 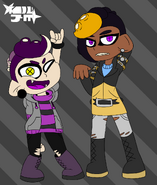 The duo recreated in Source FilmMaker, as well as a concept for the backdrop for Snapper News.
Add a photo to this gallery

Retrieved from "https://inkidols.fandom.com/wiki/Tide_Pool?oldid=10139"
Community content is available under CC-BY-SA unless otherwise noted.