Zest N' Fresh is an up and coming EDM idol duo consisting of members Pepper and Mint. Their type of genre is EDM. The duo was a big fan of and inspired by a popular Inkopolis EDM pop idol duo, 8RMZ. They host the news in the main hub of Megalondon City.

As a part of Unagix, they're made by Tan-tan (the assistant of Unagi Entertainment).

Loose hair with bumps and a ponytail at the back, an Ahoge on top of his hair

Pepper is an East Pacific Octoling, even though he was born and raised on the surface. His ancestors sided with the Squidbeak Splatoon during the war and were considered traitors to the Octarian army, so their descendants are allowed to live on the surface with the Inklings. Pepper's parents were extremely successful with with their weapon brand, Anise, which afforded their family a luxurious life. He lived a great life on the surface, but was never aware of his true identity until he meets a street performer named Mint, who revealed to him about what his ancestors really did. The two bonded for years and went on to become the idols of Megalondon.

Pepper is energetic but quite intimating sometimes. He has a short temper and can get quite pissed at times, but once you get to know him, he's actually a kind person. He thinks nudibranches make cute pets. Pepper is also quite proud of his Octarian background and his ancestor's choices, and has sympathy with the Octolings who escaped to the surface. He supported a fundraiser to help find the escaped Octarians get their life together on the surface.

He mains the Paprika Splattershot and is surprisingly aggressive in turf war.

Pepper (Japanese: かい/Kai) is 19 years old and 188 cm tall. His hair is fire red and reaches to the shoulder. It is tied into a low ponytail. It has white bumps/spots on the tips. His eyes are teal with cross-shaped irises. His skin tone is fair.

Pepper's voice may be raspy and deep, but it sounds just as amazing (according to Tan-tan). When he sings live, his voice can crack a bit. His rapping skills are top-notch because he was trained by the one and only MC Princess (talk about being rich enough to hire one of the most legendary idols to become your coach :v), who helped him produce and released his first song; "Flavor Rush".

Mint is a Dumpling Bobling. He got taken away when he was just a baby and ended up living with the Octarians in Octo Lagoon before finding his way to Megalondon City. He served as a cook for the Octarian army, and his delectable food was enjoyed by many, including DJ Octavio.

At the age of 14, he got bored with cooking and taught himself how to use the synth pad that he got from some nearby trash pile and made his own music. He's a very quiet and shy person. The Octarian elites gave him a mission to spy on Inkling society for a high amount of money, and without thinking, he abandoned his job as a cook and traveled to Megalondon City. Little did he know his intentions won't stay for long...

Without any money to spend, he used his synth pad, a very old laptop and two semi-broken speakers to perform his own music on the streets to get some quick bucks to live on his own. One day, he accidentally bumped into Pepper, who truly admired his music and offered him a chance to become a legal citizen. Years later, their relationship blossomed and so did Zest N' Fresh's career!

Mint is meek and shy, but especially great onstage. He calms Pepper down when a bad temper happens, and tends to lighten the atmosphere. Although he's an assigned spy, Mint has completely forgotten his duties and got stuck with the perfect life on the surface. Not for long though...

He mains the Wintergreen Brella and enjoys turf war since it was a part of squidhood that he never got to experience as a child before.

Mint (Japanese: 団子/Dango) is 18 years old and 166 cm tall. His hair has a mint color and slicked back tentacles. It has big black spots all over as his species' exclusive trait and makes the mint part of his hair stands out. His eyes are gold with trefoil-shaped irises. His skin tone is olive tanned.

Mint's voice is high-pitched and sweet. His first attempt or singing demo sounded like a frozen old fish in Makomart, so Tan-Tan and Pepper motivated him to not give up. With intense practice, he was able to manifest a better voice over time. A lot of fans gave him lots of love because for his effort on improving his vocals (but mostly it's Pepper who does).

A Sketch. Both of them wearing casual clothes. (This might be official art but changes will be made after the official art will be released). 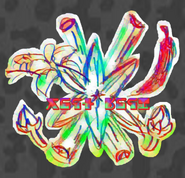 Requested fanart by KasaneTetz!
Add a photo to this gallery

Retrieved from "https://inkidols.fandom.com/wiki/Zest_N%27_Fresh?oldid=10186"
Community content is available under CC-BY-SA unless otherwise noted.